No to Nuclear! No to the Arms Trade!

No to Nuclear! No to the Arms Trade! 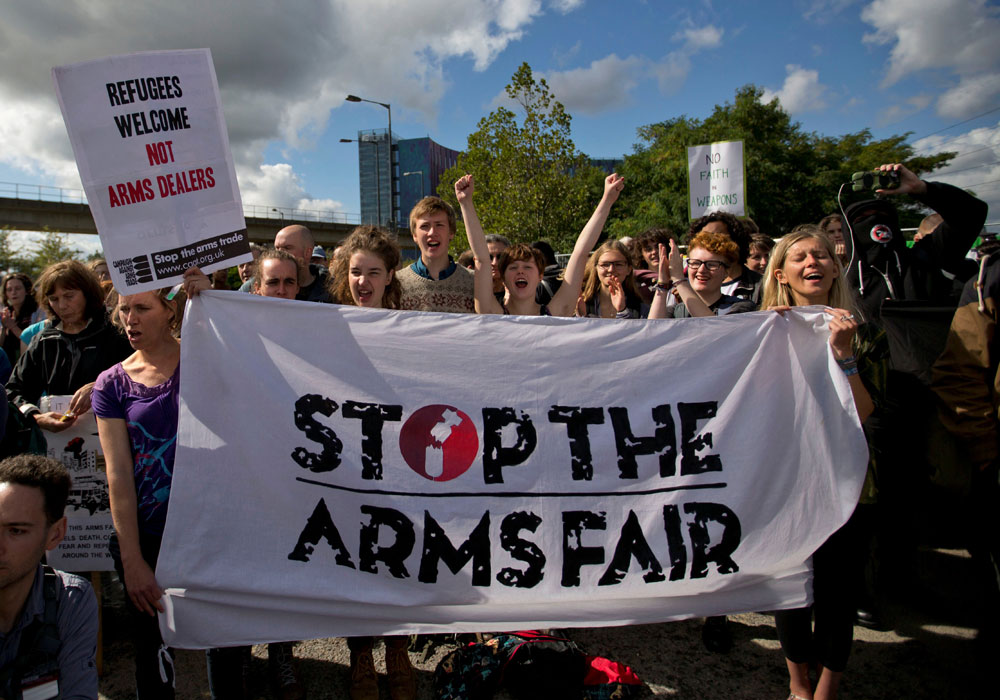 The terms of political debate around nuclear weapons have long been fixed around a few issues. The morality of possessing weapons capable of killing millions of people, and irrevocably damaging the earth, rightly comes up in discussion. The huge cost of replacing the Trident nuclear weapons system, at a time when essential public services are being cut, is a flagship campaigning issue at CND. Increasingly, more and more people are also accepting the argument that these weapons don’t meet Britain’s defence needs; it is clear that the real threats to our security are related to terrorism and cyber-security. However, what is often forgotten is that there is also a profit motive behind the upkeep and replacement of Britain’s nuclear weapons systems. Powerful people are making millions of pounds from Trident, and they are often unidentified.

The British government props up the UKs thriving arms dealers. It’s ‘Defence and Security Organisation’ (DSO), which promotes British-based weapons manufacturers around the world, operates within the Department for International Trade, the same department that is responsible for issuing licences for overseas exports. The idea that arms sales can be properly regulated by a department that is also actively promoting British weapons around the world is a total farce. It means that in the last few months, the UK has been sending representatives around the world to encourage the purchases of arms manufacturers in the UK. While this was happening, they did not manage to send a single representative to the UN negotiations on the recently agreed Nuclear Ban Treaty. The government’s refusal to engage in treaty negotiations, let alone sign the treaty, doesn’t only confirm that the Conservative Party’s commitment to multilateral disarmament was only ever false rhetoric. It also clearly exposes where their priorities are; they are not pushing for peace, but pushing to further profit from war.

In fact, while treaty negotiations were going ahead without the UK, public funds were being used to defend the Department for International Trade’s decision to allow weapons sales to the Saudi Arabian dictatorship. Despite clear evidence that British weapons had been used on bombing campaign against Yemeni civilians, contrary to humanitarian law, courts ruled that these export licenses were legal. This is a shame to the UK. It is no coincidence that arms dealers have sold £3 billion of weapons to Saudi Arabia in the last 2 years and that the government is seeking to defend their right to do so. This is such a blatant conflict of interest, undoubtedly pushed by a UK department – the DSO – which shouldn’t even exist.

Yet, less than two weeks before the UN’s Nuclear Ban Treaty opens to signatories, the DSO are hosting the world’s largest arms fair in London. Starting on the 4th of September, and lasting a full week, 34,000 attendees from arms manufacturers, governments and militaries will gather at the Excel centre, hidden away in London’s docklands, to trade in weapons of war. Key figures behind multiple nuclear weapons systems will be exhibiting all week, offering to sell their technologies to countries around the world. The promotion of these technologies has nothing to do with the security of the UK. It is about protecting the profits of those producing nuclear weapons systems.

The fair will be operating behind barbed-wire fences, protected by armed security. However, the arms fair will not be able to run smoothly if faced with significant opposition. Two years ago, when protestors were arrested for blocking military vehicles from entering the arms fair, they were later cleared of all charges, as they had been acting to prevent further human rights abuses by those attending. This year, Stop the Arms Fair are coordinating a week of actions against DSEI, and CND are working with Trident Ploughshares to organise the No Nuclear Day on Wednesday, September 6th. CND groups will be travelling from across the country and we want the biggest possible presence from YSCND. This is the perfect time for young members and supporters to get more involved with Youth and Student CND, and to show your opposition to the British government’s promotion of nuclear weapon technologies. We want to send a signal to the Tories that they haven’t got away with ignoring the Nuclear Ban Treaty, and that we don’t consent to their propping up of the arms trade. We want a nuclear free future, not a country run for profit rather than morality.

Please join us in protesting against the DSEI Arms Fair.

For more information go to the Yorkshire CND website,  who are coordinating the action.