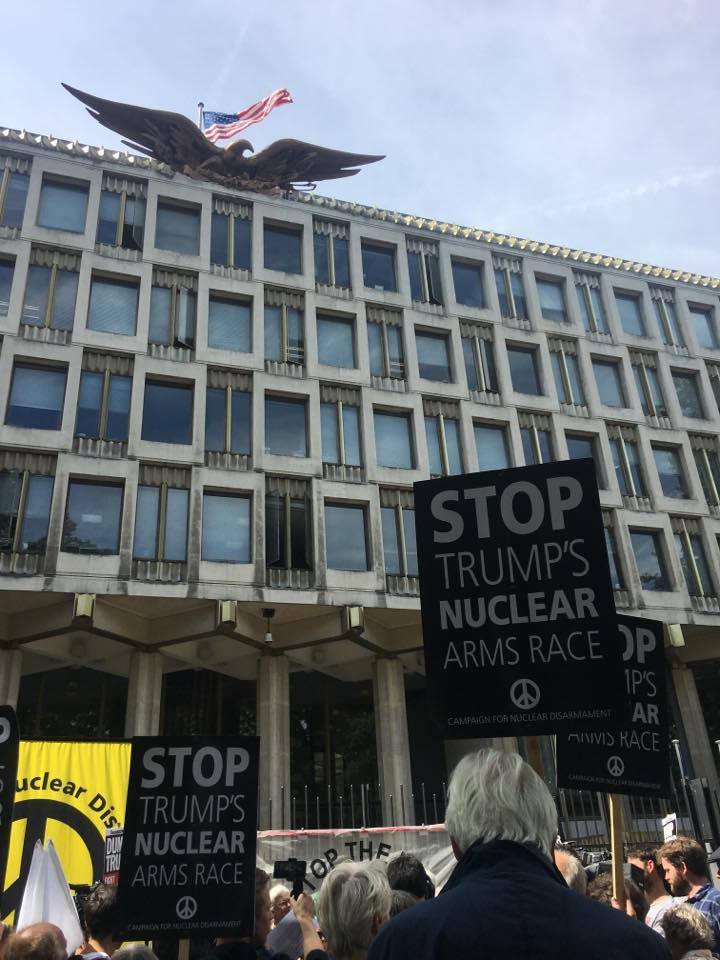 ‘Fire and fury’ is something the people of Nagasaki are all too familiar with. Last Tuesday marked 72 years since the United States, Donald Trump, dropped a nuclear bomb on the city, killing up to 100,000 people, and setting a quarter of the buildings aflame. On the eve of the anniversary, the President of the United State threatened ‘fire and fury like the world has never seen’ on North Korea, further escalating a war of words between the countries’ two leaders. And he is right; if the US’s current nuclear arsenal were to be deployed, the destructive blast of a bomb used would be unprecedented. However, the grim irony of the timing of his comments deserves reflection; we already know the consequences of nuclear weapons, and the people of Hiroshima and Nagasaki are still living with them.

So, just 3 days after groups across the country held ceremonies to remember the victims of Nagasaki, CND organised a protest delegation, to hand a letter to the US embassy calling for a de-escalation of the crisis. The letter was handed in by Giles Fraser, Victoria Britain, Jan Woolf, and representatives from CND and other civil society organisations. It asked that the US ‘engage in diplomatic talks with the aim of defusing the situation.’ The embassy refused to accept the letter.

Giles Fraser reads our letter outside the US Embassy.

While we were there, at lunchtime on Friday, President Trump was telling the media that the US military was ‘locked and loaded’ in anticipation for an escalation of the crisis. Here, an unnerving pattern is emerging. US foreign policy is not just being made up on the spot, it is being driven by what sounds snappy. Trump is devising his foreign policy based on alliteration. This would be one thing, if Trump were a stand-alone figure, but on the contrary, his whole entire administration is willing to play with fire when it comes to North Korea, and not just metaphorically. On Wednesday, US Defence Secretary, James Mattis, warned that ‘The DPNK should cease any consideration of actions that would lead to the end of its regime and the destruction of its people.’ This is an open threat of genocide. What is scariest about this situation is the clear lack of respect that Trump and his colleagues have for lives that are not American. The administration believes that all North Korean civilians are implicated in Kim Jung-Un’s regime and that their lives are disposable, so it is okay to ‘destroy’ them. It is this same belief that led to the bombings on Hiroshima and Nagasaki 72 years ago. It shows a deep held belief that human beings, if they live far away, don’t speak English, or look different, are somehow worth less. This racism, dressed up as patriotism, could all too quickly lead to the loss of thousands of lives.

Indeed, his words are symptomatic of a wider problem; the continued existence of nuclear weapons. These bombs are not just dangerous in the hands of a dangerous President, they are dangerous in anyones hands. While there is human error, inflated egos, and red buttons, we are always close to nuclear weapons being deployed. Britain’s Trident nuclear weapons system isn’t keeping us safe, it’s implicating us in this escalating conflict by association. While Theresa May has decided this crisis doesn’t merit a comment or condemnation, Foreign Secretary Boris Johnson, in true Trump-style, decided to simply tweet that ‘The North Korean regime is the cause of this problem and they must fix it.’ Boris’ comments have been echoed on the CND and YSCND’s social media accounts over the weekend. Why not go the North Korean embassy? people ask. Of course, Kim Jong-Un should stop his threats of mass genocide. The regime’s reported acquisition of nuclear weapons is a threat to world peace, and we should all be concerned, but this misses the core of what Britain’s role in this crisis should and could be, and what is realistically likely to end the cycle of brinkmanship. The US is a democracy, its President should be accountable to its citizens and it is an ally of the UK.  While North Korea has been threatening the US for years, Trump’s comments are a departure from previous more measured rhetoric, and could easily provoke the highly unstable North Korean leader. It is precisely because Kim Jung-Un is a threat to the UK that our Foreign Secretary should not be dealing with this crisis by blaming him on twitter. Instead, the UK should be using diplomatic means to pressure the US – our allies – to preserve peace, as the CND letter was asking for.

When Trump followed up his comments on the power of the US nuclear system, he remarked that ‘hopefully we’ll never have to use this power.’ Yes Donald, hopefully. But when it comes to weapons with the capability of killing thousands of civilians, hope doesn’t feel like enough at the moment. At YSCND, we’re taking action in campaigning for a nuclear free world, and specifically a reversal of the decision to the replace the UK’s Trident nuclear weapons system, which makes us a target. We’re holding a workshop day on the 21st of October, to unite the youth and student movement in campaigning against Trident. If this week has worried you too, join us to take action!  As the events of the last week have proved, our future is at stake.

Find our event on Facebook, and register for free on Eventbrite! 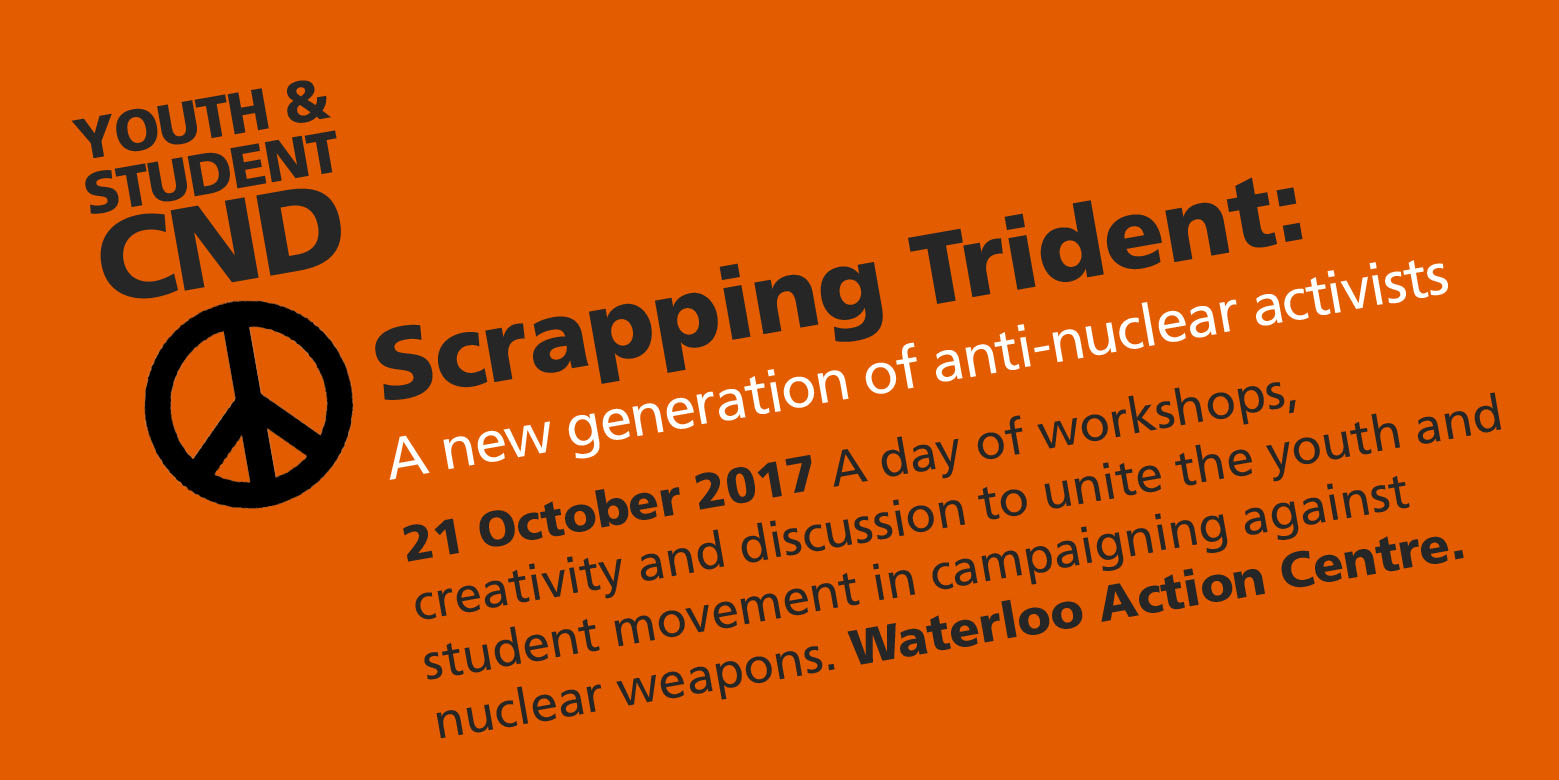