What to do with your June 8th election vote

What to do with your June 8th election vote 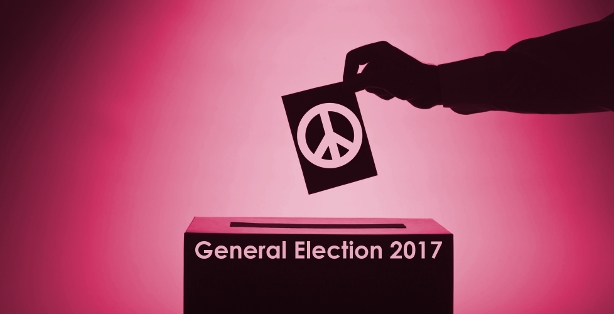 Prime Minister Theresa May’s first order of business as she ascended to power last year was to vote through the £205 billion replacement of Trident. The legislation passed through parliament, dividing Corbyn’s Labour party and presenting Theresa May as a decisive, patriotic leader. It acted perfectly to illustrate the Britain that means no nonsense as it departs from the EU with a strong and stable leadership.

One year on and this phrase has become the tired and parodied soundbite of a country that is anything but. With the snap election in a few days on June 8th, our strong and stable ship is without a captain heading straight towards a Brexit which remains mysterious despite the various hard or soft prefixes that are being thrown its way. Such a country should not be making such heavy-handed decisions about the Trident replacement process when it is in the midst of austerity. This election however, provides an opportunity for us to confront the government on their commitment to nuclear l and make a difference.

Trident remains a hotly debated topic. Defence Secretary Michael Fallon openly committed the UK to a first strike policy in April this year under ‘extreme circumstances’. This is an alarming and flippant decision which provides conveniently vague terms of usage for such a horrific weapon. Replacing Trident will cost at least £205 billion, money which is in dire need elsewhere, in the NHS and education sectors. The Times has also exposed the failure of a missile test launch last June, which was covered up in the lead up to the Commons vote.

The government is committing more resources to nuclear power as well, despite the large costs involved and the doubts cast as to its safety and longevity as an energy resource.

Outside of the UK, wheels are in motion at the UN to finalise a nuclear ban treaty in July, a historic move supported by over a hundred countries. The UK is not engaging with the initiative, choosing instead to remain on the wrong side of history. However, this can change.

The June 8th vote gives us a chance to elect more anti-nuclear MPs to stand with CND. Disregarded for being notoriously unreliable in the election process, young people have an opportunity to craft a future that they want, is it this country that we are going to inherit. Regardless of your position on the issue, we have the chance to choose what Britain will look like post-Brexit, a country that maintains archaic notions of nuclear superiority or one that leads nuclear non-proliferation debates by taking active steps to join the UN majority.

A previous survey of young people by WMD Awareness uncovered how 69% believed that replacing Trident would only encourage other countries to invest in their own nuclear programmes. Less than 20% thought we should build a new nuclear weapons system. The average age of an MP is 50 years old, which suggests a disconnect with the younger population’s views and opinions. It is up to us to let them know what we think.

CND needs our supporters to get in touch with their local candidates and remind them what is at stake. We need you to #VoteOutNukes in your constituency by engaging with your candidates on three key issues:

This can be done via CND’s website at www.cnduk.org/Election2017, which guides you through how to easily contact the candidates for your constituency. We will be posting their responses in an effort to provide you with the tools to make an informed decision when casting your ballot. You can always keep in contact with CND’s updates via Facebook or Twitter. This election, let’s vote out nukes!