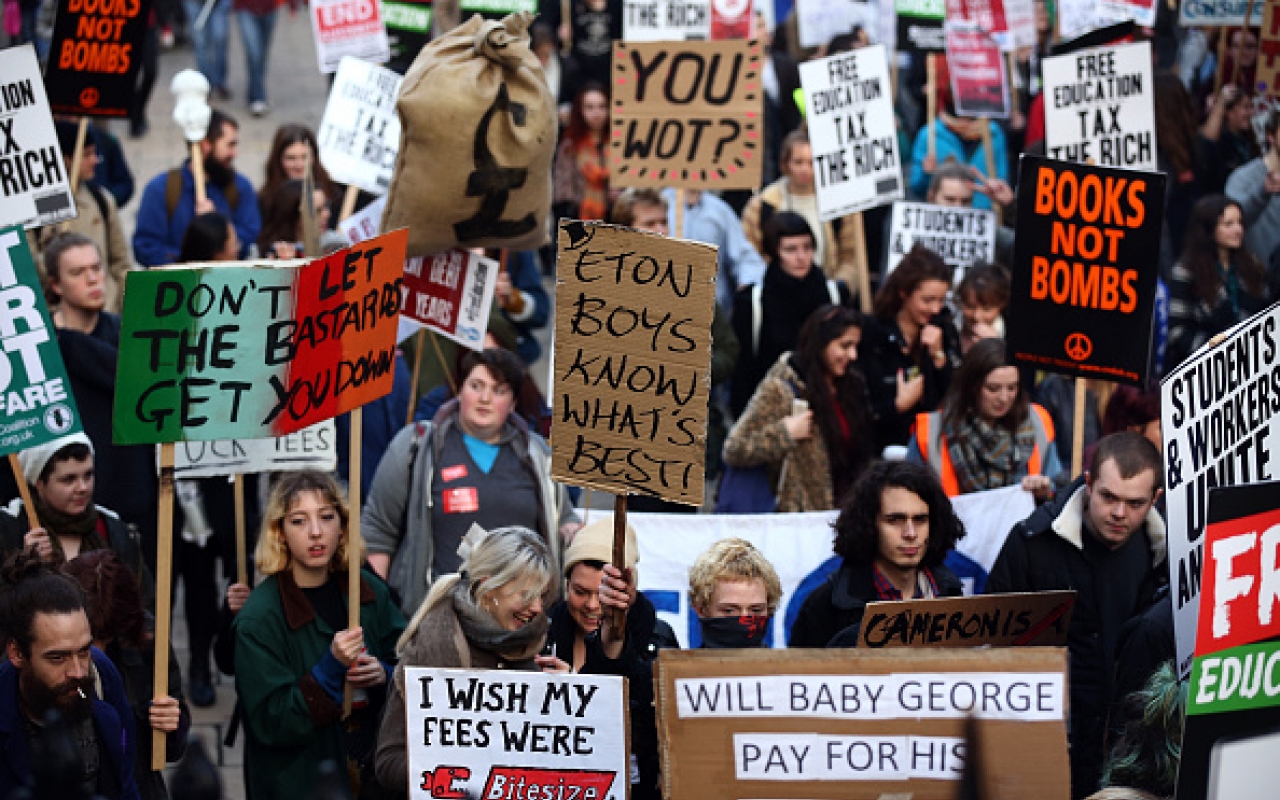 When many of my peers and I left 6th Form we had aspirations to further our education. This is a decision that is no longer as simple as it once was. We were told stories of our parent’s generations who were the odd ones out going to university, and gasped with shock as they reminisced of a time where you could be paid to go to these places. Surely not! We are frequently reminded to dash our hopes of such fantasies for ourselves. Chastised for setting ourselves unrealistic goals and for asking too much from student protest. The media reports false truths about the modern student position, making smarmy comments about us being able to pay back our loans if we stopped eating avocados, and saved like all those wise generations that came before us.

University has swung from a privilege to commonplace pursuit for those leaving school and in many respects that is a great thing. However, it appears to me that the university push that I felt behind me at school had ulterior motives. Sadly, like so many things in life, the motive is money. A friend of mine who graduated last year, recently shared with me her first student loan repayment letter. She, like the hundreds of thousands that have graduated in recent years, is looking at repayments in the ballpark of £50,000, a staggering debt for a 21 year old to begin their adult life with. Furthermore, we noticed she had been slapped with a further £5,000 or so, in interest repayments which had culminated across the time she was getting her degree. Wonderful. Sad as it is to say though, it was not a surprise to any of us that winced as she read the letter aloud for us in our dingy student house.

Student debt is becoming normalised and frankly it is infuriating. In the four years I have been at university, I have watched dismayed as the government laid honey traps for naïve 18 years olds, who like myself, were sold on the necessity of a higher education degree in an increasingly competitive workplace. I was the first year to despair at a full university degree under the £9,000 tuition fee rise and jump at the government’s hospitality in offering student loans that would not only cover my degree, but an extra £3,000 and something in the form of a maintenance loan too. Phew. Thank god for David Cameron, what a thoughtful bloke. Knowing no better, and pressured by schools, parents and government rhetoric, we entered the university machine.

I watched over my four years as a student as my campus fell victim to privatisation and students were disciplined for protesting against the changes. Behind the scenes, my loans were being privatised too, without my knowledge, and suddenly it was too late. Students were lied to. On the basis of their eagerness to learn, we continue to be exploited. Have you heard of The Sale of Student Loans Act 2008? I hadn’t. These underhand changes to how we learn have made the entire experience bittersweet. The government has offloaded its education costs onto the individual in a spectacular fashion, and sold it to the youth as an opportunity. Universities has become a market, where students are customers first, and foremost. Over 80% of universities hiked their prices up to the £9,000 cap in 2012, which demonstrates the profit driven culture that has permeated education, without any regard for the quality of the service being provided.

The discussion continues sorely today, highlighted by Labour leader Jeremy Corbyn’s manifesto promise of cutting the fees all together this year. Student protest continues to expose the lies that were sold to us at the beginning of our degrees that see the Student Loans Company rake in upward of £12 billion from the age group statistically in the lowest paying jobs. The government’s go-to rebuttal to the criticism is that they cannot afford to subsidise the increased university uptake. Budget is stretched, and education is a money-pit, like the NHS and other social services. All these excuses ignore the elephant in the room.

The government can always find money to invest in things that it deems priority. Trident’s renewal is set to spend £205 billion of the UK budget towards the sustaining of the nuclear deterrent by the 2030’s. This is enough money to pay for over 8 million students tuition fees, and yet it will remain tucked firmly away out of reach of those things that are open for discussion in the budget. If anything is a waste of money, surely developing nuclear weapons in what is quite clearly the safest corner of the planet, is ahead of providing healthcare for the sick, and educating the future of the nation. The continued assurance that these weapons are ‘essential’ bringing into scope bizarre priorities of those who make decisions on behalf of the rest of us.

We urge the UK government to listen to the generation that is set to inherit the country and realise the damage it is doing to the longevity of its labour force. We can see a clear solution to the tuitions problem right in front of us; cut Trident, not education. Education surely, is the key to resolving the geopolitical disputes for which nuclear weapons are reserved, renewal only entrenches the behaviour that enable nuclear proliferation to continue in other countries. If the United Kingdom wants to continue to count itself as a world leader, it needs to recognise what is worth nurturing. Our nuclear arsenal makes up less than 2% of the nuclear stockpile globally, a mere drop in the water in the grand picture but considerably more in the scale of the UK. It is unsustainable to make excuses about nuclear weapons, education is essential, health is essential, nuclear weapons are not. Without either of the first two, society would collapse, can the UK government really claim that the same is said for Trident?

Latest figures claim that three quarters of students will not be able to repay the full debt by the time it is written off after 30 years. Despite this the pay cap is now ready to be pegged against inflation, should, god forbid, the student value-for-money statistics start to creep up from their all-time low of 35%. Trident however, remains impervious to austerity. The government has failed to guarantee to its younger population that it values their contribution, and instead plows ahead of with an outdated nuclear programme that fails to address the needs of modern society.