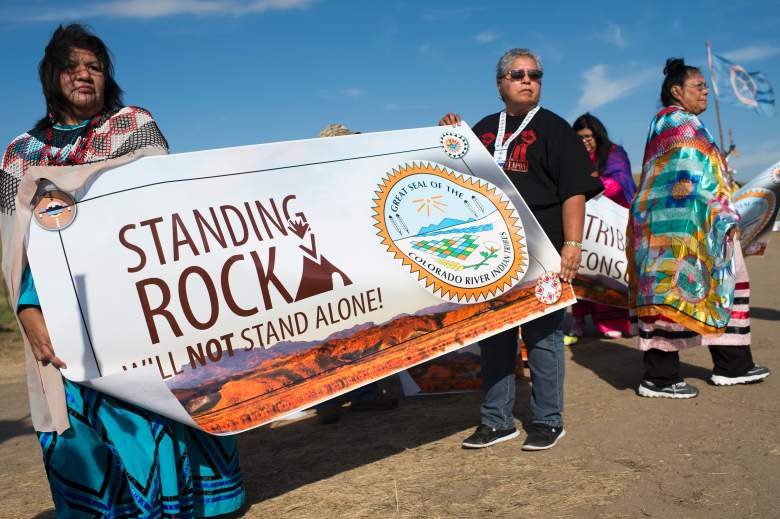 The clash of unarmed protesters and heavily militarised police is unfortunately all too familiar in 2016. From Black Lives Matter to tuition fee demos, the response to popular protest now regularly involves some level of violence, even when activists are employing entirely peaceful methods. Protests at Standing Rock in Dakota, opposing the construction of an oil pipeline, have been the most recent example of this.

But after months of action, last week brought good news for those at Standing Rock. Their fight against the construction of a section of the Dakota Access Pipeline, which will transport oil produced through fracking across America, was vindicated as the US Army Corps of Engineers announced they would not give permission for that section to be built.

Activists had camped out close to the reservation of the native American Sioux tribe since April, demanding that the US government refuse contractors a permit to build through the area; they argued it would not only threaten the supply of clean water, but would destroy sites sacred to the Sioux tribe.

It was a campaign that brought together native Americans and environmental activists, fighting to protect the planet and the rights of indigenous people. It was also a protest that was proudly and defiantly pacifist. 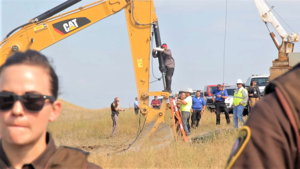 A Lakota man locks himself to construction equipment in protest

Guns and other weapons were banned from the protesters’ encampment from the outset, and even faced with police violence protesters did not respond in kind. Yet the reaction to this clearly peaceful protest was ruthless violence, from local police forces and private security forces. In fact, the pipeline protests only came to mainstream attention after Democracy Now reported on the use of police dogs against the protesters, resulting in bites and other injuries.

Since then, Standing Rock has faced tear gas, rubber bullets, sound and water cannons, tasers, and a plethora of other devices described as ‘less-than-lethal’ munitions. The tear gas grenades used have been banned in many other US states, whilst the water cannons’ effect has been amplified by the below freezing temperatures at Standing Rock, leaving protesters coated in ice and unable to recover properly in their basic camp.

One protester is reportedly facing possible blindness in one eye after being hit by these weapons, whilst another nearly lost her arm. When questioned local police claimed they were using violent measures appropriately – for example not aiming water cannons directly at protesters – even when video footage clearly showed otherwise. The situation at Standing Rock became so hostile that a group of US veterans moved in and formed a protective barrier between protesting civilians and police and security forces.

State violence of this kind is always abhorrent, but against patently unarmed civilians it becomes ridiculous. People engaging in legal protest and civil disobedience were met by enforcement agencies as though they were an armed brigade, as though this was a war rather than a demonstration.

In fact, the equipment being used by police were instruments of war; following the decrease of America’s military presence in the Middle East, heavy duty equipment used in these conflicts has been sold off to police forces across the country.

This is why we see images from America of police responding to events dressed for war, riding in armoured tanks and grasping automatic weapons. Thus the violence of the Dakota Pipeline protests can be directly linked to the violence of recent wars.

But at Standing Rock, protesters held out against this uneven power struggle and have halted the construction of the offending section of the pipeline. Peaceful yet determined activism has won. In fact, the injustice of the heavy militarisation of the police response has been key in gaining mainstream media attention, as well as the sympathy and support of large swathes of the public across the world.

Standing Rock has highlighted the almost commonplace nature of police violence, as well as proving it doesn’t work. A group of environmental activists and native Americans, armed with nothing but their convictions, have faced the might of a militarised police force – and convincingly shown their peaceful methods are the ones which work.